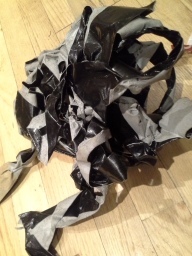 Owen got a roll of duct tape in his stocking for Christmas. At first he ignored it.  I suspect Owen does not like to be considered predictable.

But Santa knew what he would do with it, and sure enough, a few weeks later he got interested and spent a couple of days joyously wrenching tape off the roll.  And wrenching.  Duct tape makes a terrible and satisfying sound as you pull it off.  Duct tape also has a terrible smell.  It smells like something is wrong, rather than something is about to be fixed.  Someday, if I get chance to speak to a duct tape designer or chemist, I will ask why this is.

When Owen wanted to take the stinky mass of stuck up tape into the bathtub with him though, I objected.  Who knows what chemicals he would be absorbing through his skin, as the hot water soak and steam softened those adhesives? So I stuck the sticky things (there were at least three by then) around the corner in the hall at bathtime.  But he found them of course, making a naked search and rescue while mom was down the hall writing or more likely doing laundry at the other end of the hall on a Saturday morning.  By then the tape blobs had picked up all kinds of dirt and dog hair, were in even less savory condition and just as smelly. Into the bathtub they went, which gave Owen great pleasure. And into the trash they went thereafter, which gave his mother great pleasure.

But not before they lay around the floor a while, clogged the toy drawer, and were carried off by Trum the Boston Bulldog into the backyard mud a few times and left there to improve with rain.

In general I don’t like plastics, and the laziness and waste they permit to our “throw-away society.”  But there are exceptions to how I feel about this, and one of them has to do with watching the simple pleasure Owen gets from unwinding an entire roll of duct tape, and then being allowed to throw that blob out afterwards. 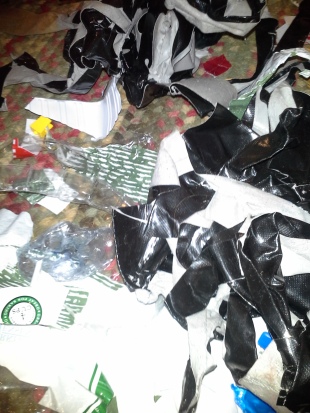 Wystan Simons is a writer, gardener, and mother/ stepmother of six young adults, including Owen, a young man with a mischievous glint in his eye and a genetic difference 5p-13.

Wystan has written a book about life with Owen which she hopes to publish this year. To get a preview chapter from the book, contact her at: