If you caught my last posting for Suburban Growing, you know that plastic has been much on my mind. How could it be otherwise, you might ask, when you live with a guy who is a plastic connoisseur?  A guy who chops up plastic for an occupation – a mission – a passion? Too true, Owen and I are both passionate about plastic.

Ok, ask the next obvious question: how on earth have you, a plastic hater, allowed so much plastic into your son’s life anyway? Until the floor of your house is gritty and lumpy with chopped up bottles and dismembered toys, and dissected plastic bags swirl by a the ankles (hey, only on a bad day) as you pass through the room?  Ah well, that is a very different kind of question, and the answer has something to do with fatigue and giving up in the face of the storm. Something any mom or dad gets.

Heck, until recently Owen’s morning bathtub could be swimming in plastic –  multi-colored hard plastic shards, or shimmering plastic bag ribbons and banners. Sometimes there was hardly room for him in there, if the baskets went in too. Owen enjoys taking things to extremes. I had to pick plastic out of the drain regularly to keep the water moving. 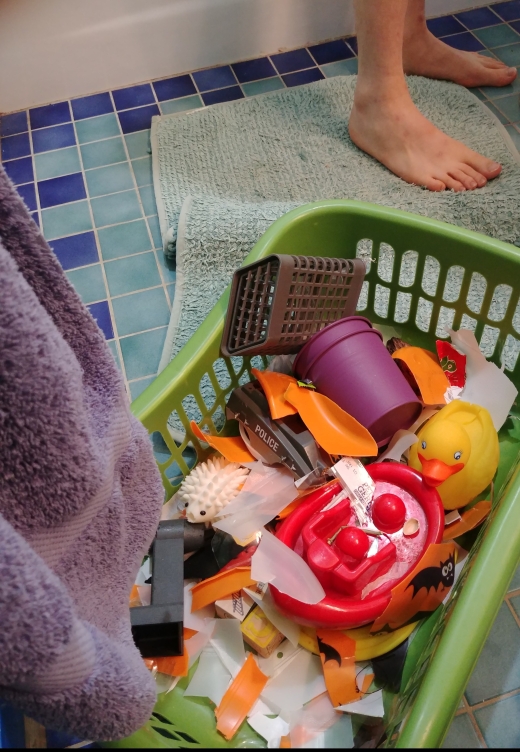 But no more. After I listened to that pivotal NPR program about pervasive micro plastic pollution last November, I gathered steam to put my foot down. In a very nice way (of course!). It is one thing to allow a person to make a mess, but it’s another to hurt the environment and poison his body thereby.  I may be a hippy, but I have limits.

I told Owen, “Plastic is great for cutting, but not for baths. Plastic in your bath will make you sick. Wooden things can go into the bath.”  Owen was naturally not all in with this new regimen. Yet I have been amazed at how much he has accepted the new rule for plastics. He didn’t get mad. He didn’t stamp his feet. I was prepared for those things. Maybe designated chopping times and locations makes his life a little more interesting.  I know that his life is boring to him, an issue of much greater concern. The other explanation is that Owen understands when I say “This will hurt you.” That would be wonderful.

Every morning he brings his plastic basketful of plastic into the bathroom, and every morning I say cheerfully (of course!) “Oh plastics are great for cutting, but they don’t go in the bath.” It is easy to be cheerful when Owen is co-operating with me, when I getting things my way. It is a great relief to get those piles of plastic out of the one most sensitive areas of Owen’s life.  If only there were a way to get it out of our lives all together! Don’t worry buddy, no chance of that any time soon.

After putting my foot down, Owen and I took a trip to the local Goodwill, and perused the shelves for wooden objects. We had a good time. Owen loves wandering the Goodwill.  Besides a wooden rolling pin, and a weird wooden and metal agility toy, I found a whole set of wooden alphabet  blocks.  Apart from being non-toxic to Owen and the waterways, the switch to wooden bath objects has yielded an unexpected benefit.  Using some giant wooden letters I found at Target and the secondhand alphabet blocks I am taking a few minutes each day to talk to Owen about  letters and their sounds while he is in his tub. Keeping it fun. Am I imagining it or does he seem to be listening? 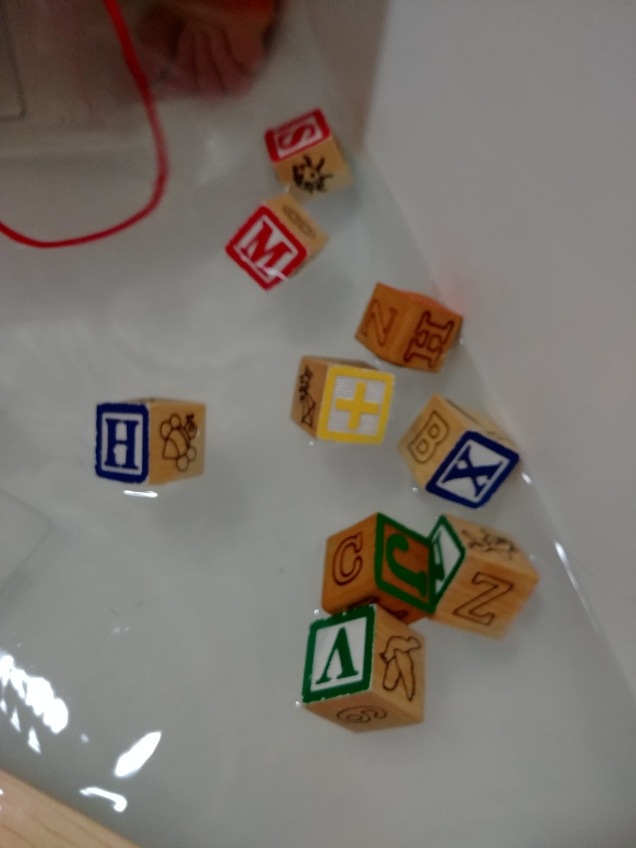 You can’t do much to manipulate wooden alphabet blocks though, and manipulation is exactly what Owen loves about plastics (and aluminum cans too, if he can get one)  To be able to act your will on something and alter it –  the whole broken down to bits, ripped, chopped. Those large and brand new letters from Target are (were) more intriguing since they can be broken up. Now our E is an F, and the S has been deconstructed into two lower case “u”s. But I am not giving up – I sense cognitive receptivity in Owen that I do not remember sensing before.  Maybe his brain is maturing, on its own maverick arc? Maybe if you are bored enough with your life when opportunity presents itself you respond?  Could it be that standing up against plastics is the spark for an entirely new journey for me and Owen?

Or is it possible that by fixating on plastics so obsessively, Owen has been making that point all along?  Look at this horrible stuff that I am dragging into the house, and piling in the corners, and finding in the fields and in the woods, and the parking lots!  LOOK MOM! LOOK!! Isn’t this GROSS!?!

Owen’s family had a really nice Christmas, with some cranky moments. For instance the time Freya and Owen had to crank out the cranberry relish, and neither of them wanted to. 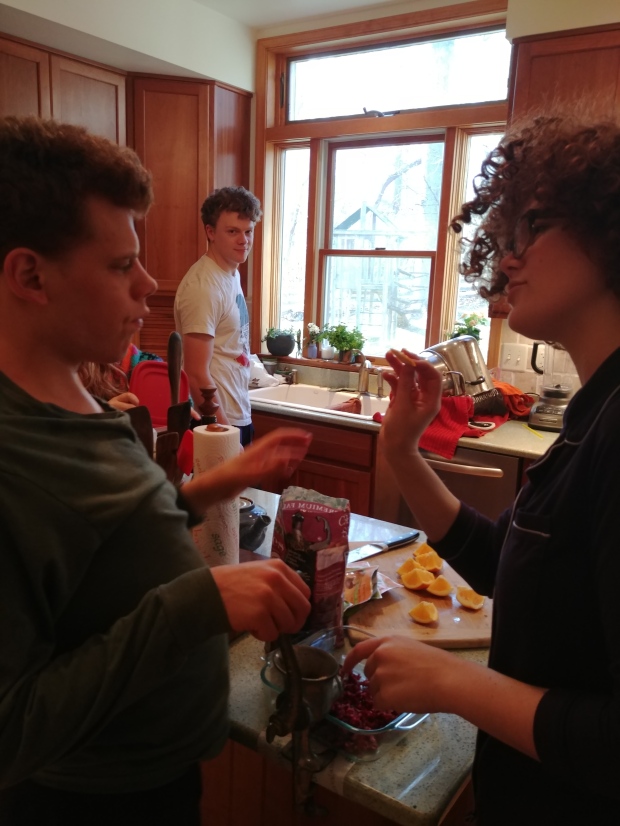 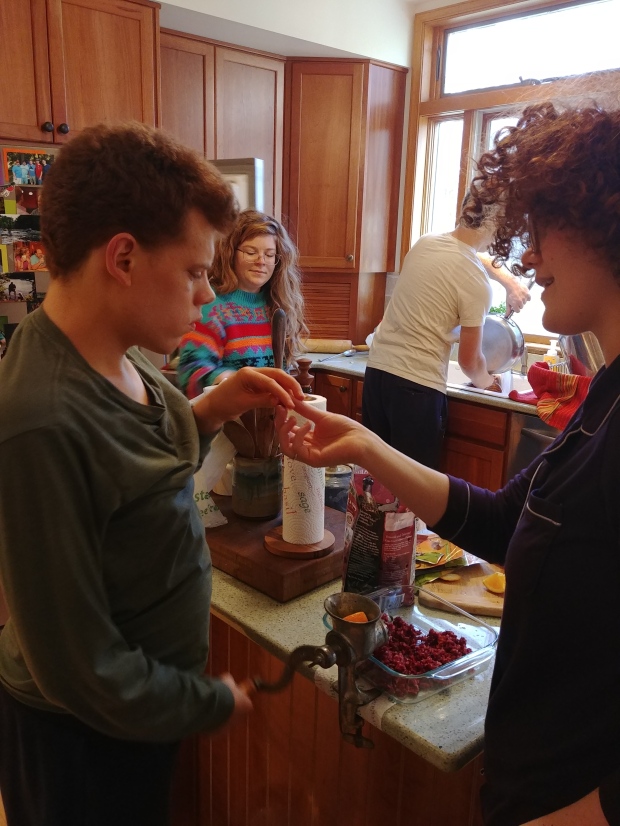 Sometimes you just have to take life cranberry by cranberry, until you get to the part you relish —

Owen likes cranberry orange relish. But if I had to take a guess, the single thing he relished most this holiday was chocolate. Readers will want to know that Owen did not get into the Christmas stockings this year, (thanks to the baby gate his siblings installed Christmas eve). But he did manage to steal and consume between 5 and 8 bars of chocolate by the time the holiday was finished. And for a person who doesn’t eat and shouldn’t eat chocolate, that’s a LOT.  Luckily, mom kept buying more. A very satisfying Christmas. For all. 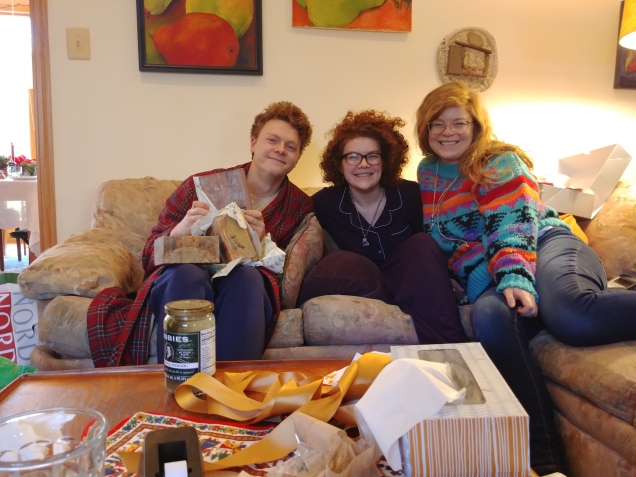 Now as we head into the icy blast of 2018, Mom is crankin’ through the second half of her radiation treatments. One day Owen came to help. 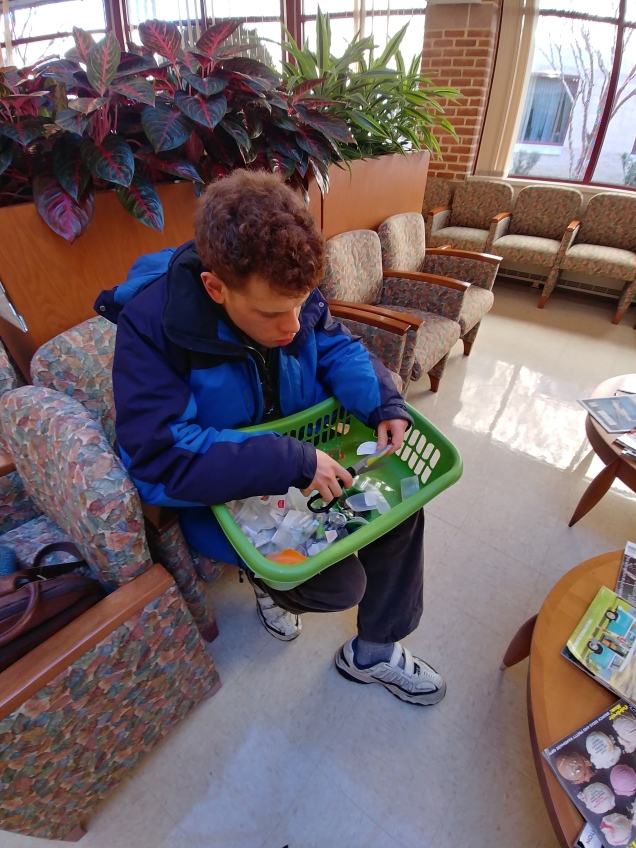 The volunteer greeter left her desk (thanks Sally!) to sit with Owen, while his mom went to get her treatment.

But even better is to get in the cozy car, and drive home. One more done. Cranberry by cranberry, we’re getting there.