This is actually a post begun last year. I came across it just now, and was shamed by the optimism. Everything I wrote here is true. It just hasn’t happened for a while. By now everyone knows Owen loves plastic and trash collecting walks….

But what about when the great outdoors just doesn’t cooperate for walking? I can’t let the winter season pass without paying tribute to one organization that helps Owen keep walking no matter what the weather brings us.  Our gym.

Owen has his own membership, and can take a guest.  The manager and staff of Planet fitness in Bowie have come to know him, and to know us through him, as people tend to do. After he walks for his 20-30 minutes, rumpling a piece of plastic (the plastic is important!) he is done.  I might be able to get him to sit down on a weight bench and wait for me to do my shoulder exercises. Maybe.  Then we might wander a few doors up to My Organic Market to select a treat. (Artfully dodging the Tootsie Roll bucket on the Planet Fitness counter.)

I’m not sure why Owen is willing to walk like this on a treadmill for me, but I’m glad he is.

The biggest challenge Owen has with using the gym is…us. Neither Edward nor I like going to the gym too much. We would rather work outside even in bad weather, which means Owen stands ignored (and frozen) while we rake or prune or weed or plant. And since dogs get left out of the gym equation, we are more likely to take that walk – even though Owen isn’t into it. But as I read this old post of mine, and look at the pictures, I am reminded of how valuable this gym thing is for Owen. How good to walk along and have me or dad standing there saying bravo.

He could use some more of that these days. Owen has been grumpy and difficult lately. He seems kind of explosive.  I think the problem may be that the kindly man who is Owen’s one-to-one aide at his day program is not a good match. It is hard to say why these things happen – but individuals with disabilities are individuals, with tastes. Sometimes the chemistry just isn’t there.

When Owen’s aide tries taking him to the gym, it doesn’t work at all. Owen ran away and ate Tootsie Rolls, the man wrote in the communication book, twice, he said. Owen came home with a big red ring of irritated skin around his eye. Owen walks nicely for me, and his dad, and for his sitter Kathie. It seems that being directed by this kindly older gentleman just irritates Owen. It may be mutual. Everyday lately he seems to come home pricklier and pricklier. What is it, I wonder? There so many possibilities. Is he bored? Not sleeping well? Constipated? Bothered by the weird winter? Allergies? Gut hurting from more garbage food grabbed on the sly? Luckily for Owen, the supervisors of his program are already on the hunt for a new one-to-one aide. And Owen’s mom has not given up on finding some kind of employment for him – everyone is happier when they have a job they have to do.

Meanwhile, maybe we need to get back to the gym. Movement can help most things feel better.

Yeah — Owen knows how to use the Big Red Stop Button too. Nothing like being in control of your own environment. Bravo Owen.

And thanks, Planet Fitness Bowie, for YOUR support and encouragement — 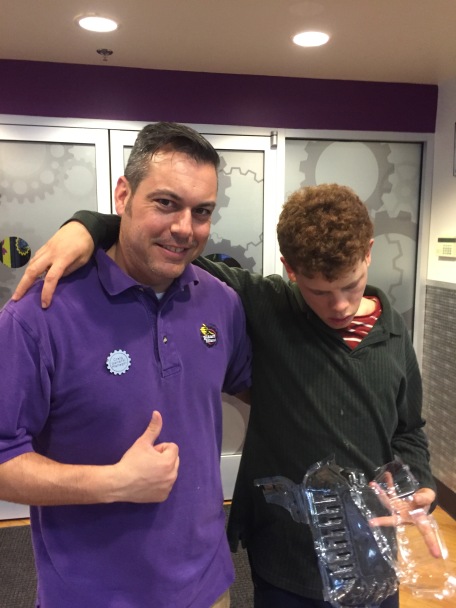 We all need all the help we can get!

The night before I was to leave I woke at 3am, three hours too early. I wondered why. And wondered. Did Owen maybe need me?

A trip down the chilly hall revealed Owen up on his elbows in bed, also wide awake. Who knows why. Who knows why I knew, why I felt the psychic call (did I?) for help. Do we do it to each other?

Three hours it was bathtime, and Owen and I were both up again. Then away I drove.

To be a caregiver — whether of an infant, or a sick child, a person with intellectual disability, or one with an aging body, or a friend in need — is to allow yourself to be connected. Plugged in. To respond to need at unreasonable times of day, without rancor.  Or preferably without rancor. Simply to respond, to do what needs to be done. This is pretty great spiritual practice for an independent, impatient so-in-so like me.

For the past days I have been out of reach of my Owee radar. I am sleeping very well every night. My daughter is filling my place and her father’s place, continuing her own lessons in caregiving that began early. Owen loves to have his siblings home, particularly when they are paying attention to him. I’m sure that is why I can relax so deeply.  In that sense my Owee-meter is still at work – I know he’s happy.

Freya texts me that he has been speaking in his gravelly deep voice, making remarks on a theme:

Even though at home it’s cold, an ice storm in fact, and I learn they have lost electric power, I feel confident Freya has reserves of humor and creativity to manage what she is thrown.  For a few days anyway…although as I write these words down, I can feel my anxiety rising…it helps to remember that Edward will get back home before me.

When I am with Owen, my job as his  caregiver is to tune in. When away, my job is to tune out. To set down the burden of him for a while. To let go — to forget him in fact. Both things are important, in their season…each difficult. Apparently. 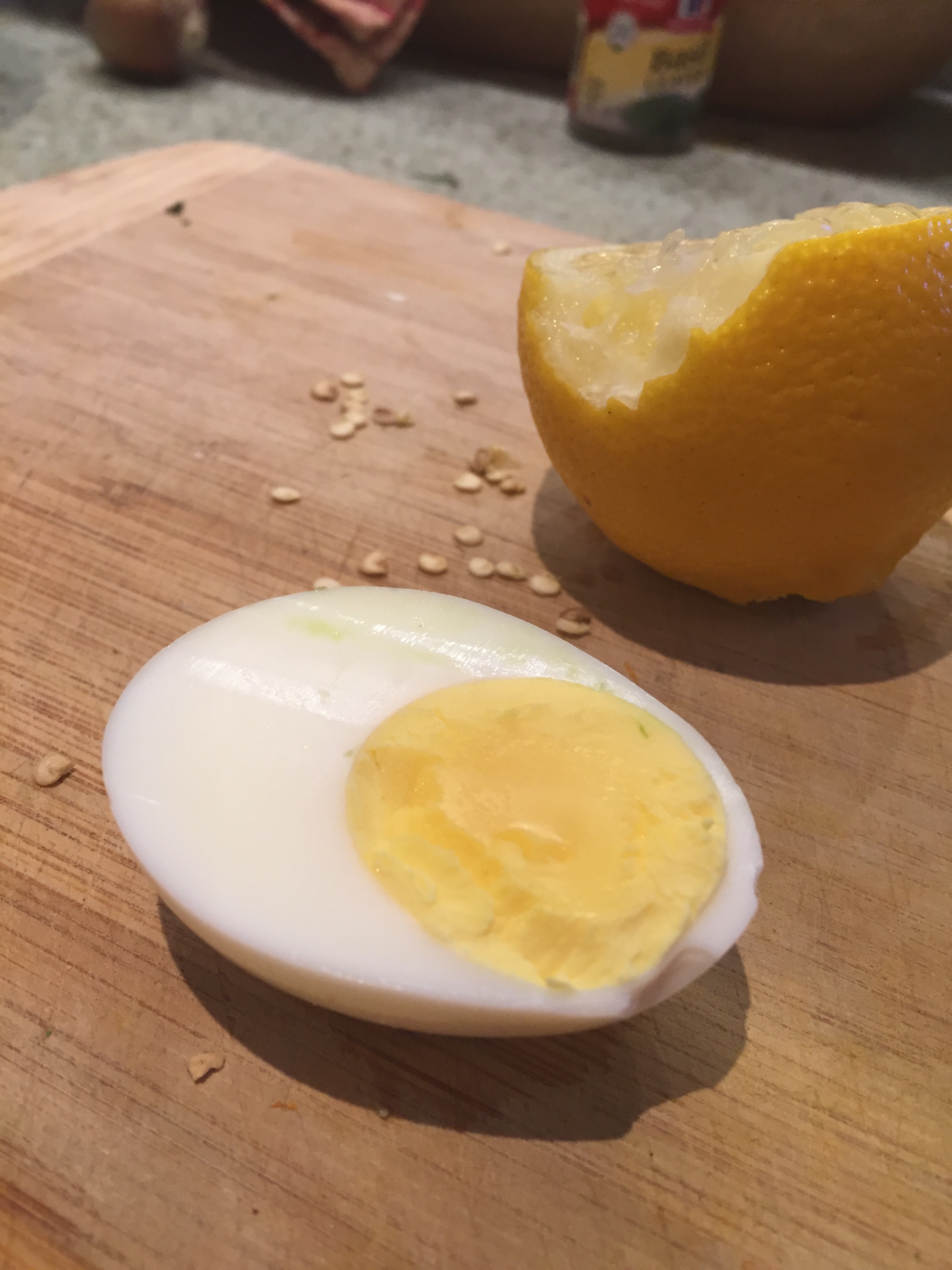 The weather in Maryland has been playing like it’s April Fools in February. Will we have summer today — or winter?  –or spring? Anybody’s guess. And maybe Owen is playing along, kind of restless and antic.

During the February week that Owen’s mom (alias me) spent sick with a relentless cold virus, things got a little more chaotic in a world always teetering on the edge of the abyss.

Plastic piles in drifts accumulated around the furniture, an in corners of all rooms. Kale mounds spontaneously erupted on the bathroom floor.

Or so it seemed to mom, as she dragged herself from the chair at the breakfast table to her bed again, feeling buried in detritus but just not really caring that much. Owen’s dad took wonderful care of him, as always, and waited patiently for things to normalize. Instead he got the virus. So maybe it’s understandable that Owen is a little more squirrely than usual. Or blame it on these radically changing temperatures. Owen likes predictable. So do I.

Thankfully Owen is kind of predictable, in a chaotic sort of way. Which is why, when things did begin to normalize (?) and I came into the kitchen to clean up one night, after a speedy post-grocery-shopping-with-Owen supper of omelettes, and couldn’t locate the box of eggs – the brand new bulk box of Pete and Gerry’s – I was worried. I saw that I should have known better. In a moment of foolish practicality, I had purchased those 18 eggs in the plastic box. In another moment of wooziness, I had gone to the toilet without putting the eggs away, tying up the fridge, and locking up the kitchen. Drat. And drat Pete and Gerry anyway for using a plastic box. Gone AWAL.

The beauty of being sick for a week, however, is that you get lots of time to sleep. Although end-of-day weary, my sense of humor was intact. Feeling calm, I communicated the problem to my son.

“Owen. We really, really need to find the eggs!”

No eggs in the fridge veggie drawers where I have found eggs rolling before in similar situations. No eggs in Owen’s collection-of-stuff drawer in the family room. But in the green basket beside the drawer I unearthed hunks of plastic egg crate with a telltale label chopped and mixed into the melange. 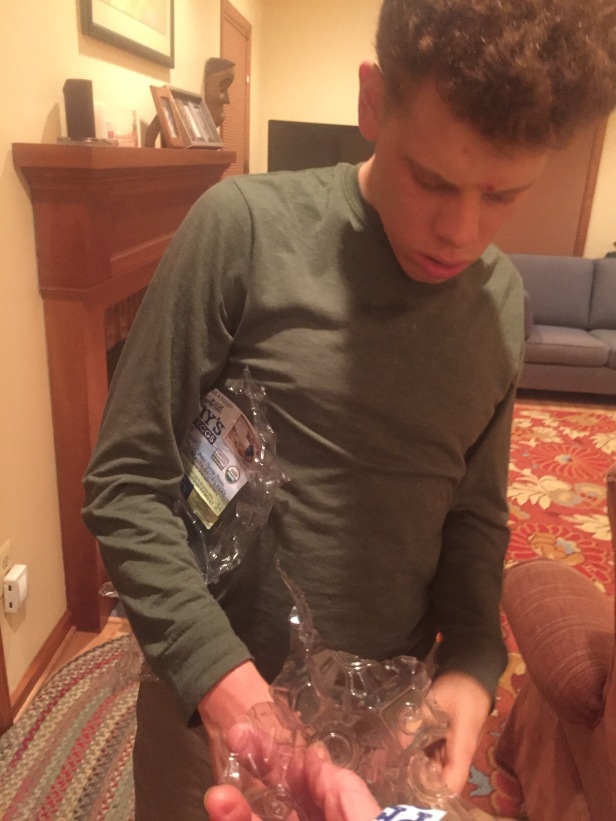 I took Owen’s hands. “Owen, where did you put the eggs that were in the box?” I peered into his face, trying to keep my mind off of leaking albumen soaking into upholstery. “I need to find those eggs.”

He looked off away, into space, brow furrowed, mouth slack. For Owen, the shop closes down about 9pm, and after that the processing of language will be even harder than it always is.  He looked as though deep thinking were required – Eggs? hmmm. Eggs. Do I know Eggs? It seemed as though he would have liked to help me…on the other hand, he could have been really worried about what was on his horizon, when I found those eggs. What do I know. Either way, the circuits were clogged.

I took his hand, and modeled “search for” as we moved through the house. No eggs on the couch, good — and upstairs no eggs on Owen’s bed. Glory Days kale that had the misfortune to be packaged in a glamorous sunrise orange and purple bag wound up in a huge heap on Owen’s bed not too long ago.

Found. How appropriate to end an egg hunt in a basket.

I required O to help lift the leaking shells into a convenient bucket, although he wasn’t happy about those goopy egg whites

The bucket had to be pretty clean I figured, since I usually use it for bathtime dousing. From there into a pot of hot water for the eggs, and into a newly made bed for Owen.

Edward returned from his evening meeting to find a kitchen full of groceries and a pot of hardboiled eggs — already cracked.