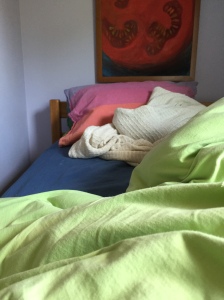 This April post was delayed a week.  My sincere apologies.

It is 5 am.  Because a thump noise or two woke me, I am stumbling down the dim-dark hall to see what’s up with Owen.  His door is shut, but light streams out from underneath it.  Well, good, at least he’s not in the kitchen.  Open the door, and there he is in all his glory, naked, seated on the rug, and sifting through the contents of the huge rolling drawer under his bed, stuffed with bits of his past and present treasures.

Owen generally strips in the mornings, and generally strips his bed as well, and the pile of bed linens and night clothing he throws off mounds up behind the headboard, wet, dry, and in-between all mixed together. And so most mornings start with a sorting and hanging-up-to-air-out ritual, with Owen helping.  After all these years, and much as he likes routine, Owen still seems uncertain what the criteria are for which thing goes where.  He hesitates, dangling a dipe nervously over the trash can, so I curb my impatience and direct him.  THESE things go to the laundry, THESE things to the trash, and THOSE things we hang up.  Owen hauls the wet away to the laundry, while I pull up the window shade to let rays of early sunshine beat in upon on the mattress and blankets.  Then we hurry on to the bath or shower.

I like things better at the other end of the day, when it’s time to make up beds again.  Laying down the mattress protector and tucking in a fresh, sweet smelling sheet is a job I never grow tired of, although my back does. It’s satisfying to build Owen a nest.  I wish other parts of providing for him were as straightforward as this one.

Before I know it, the cycle will begin again, the stripping and then washing, the airing, the drying, the remaking. Repetitive tasks are seen in our culture as tedious, but they can also be calming.  They have a rhythm and an inevitability, a cycle as continuous as ocean waves.  Perhaps my mind makes this association because of the recorded waves we play on Owen’s sound machine at night.  It’s as if my bed-making arms were the waves, rolling out, rolling in.   Pull, drag, dump;  pull, carry, hang;  pull, fold, and tuck…

As I settle Owen for the night, I am reminded of something I read once in a parent newsletter written by Jon Shestack, father of Dov, a rather famous young man with autism (Strange Son, by Portia Iverson).  Shestack described being uncomfortable with his profoundly disabled and agitated son when he was awake, but loving to sit with him and watch him sleep.   Then the troubled face was beautiful, the tense body relaxed.  Then, finally, he could hold his son in his arms.

There is Owen, all curled up in the covers of a freshly made bed, safe, warm, and relaxed.  He has had his prayers and his kisses.  I know he is happy – Owen loves to go to bed. For the moment, there is nothing more I “should” be doing to care for him. Well, ok, launder some socks and undies maybe.  But until he rips those sheets off again, his restless spirit has everything it needs in a nest of clean linen.