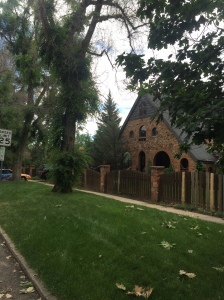 It was another gorgeous July day in Boulder Colorado – the day after Owen’s brother Scott’s wedding in fact.  Owen’s mom was busy in the kitchen. Owen objected to his mom being busy.  Or — was he was inspired by it?  The more frantically she was getting ready, the more busy he was likely to be himself.  This morning a post-wedding brunch was planned, but no one had talked to him about it.  All Owen knew was that he had spent a lot of time sitting yesterday, and he wanted a walk.

He slipped out the front door of the rental home his family was staying in. The quiet streets of Boulder beckoned, shaded by the lofty and carefully watered  maples, oaks, and pines.  Owen lifted the latch on the gate to the front path, re-latched it, and no doubt he grinned as he eddied off to the right down the sidewalk.  Only a few days ago he had walked this way with his parents and his brother Oskar, out from under those tall trees, along sidewalks and across streets, through the University of Colorado campus and into Boulder downtown, with its shops and restaurants.  He liked it and wanted to go again.

Owen did not get far in his ramble, eyes searching sidewalk and curb for interesting gravel, when his eye, his imagination, and possibly his sense of mischief were captured by the green backyard of an unlucky neighbor.  This neighbor had unwisely chosen not to put up any fence.  Back Owen wandered, to forage in the gardens and leaves —alas! No recycling bin!

In his constant quest for interesting plastic, Owen entered the back door of the house hopefully.  A woman who had been used to calling this space her home was alarmed shortly after to find a young man prowling about her kitchen.  A strange young man – some dangerous, drugged up student from the university no doubt!  She yelled to her husband for help as Owee eddied out the backdoor again.  This house did not have good plastic energy.

The husband of the frightened homeowner followed after Owen, out the back door, around the side lawn, and out onto the sidewalk again.  Quickly recognizing him as a non-dangerous individual, but possibly one in danger, this man continued to follow after Owen, through the fence, across the concrete school yard, making one-sided conversation,  and hoping to redirect him.  Apparently Owne did not have any interest in re-direction.  But when the school yard gave way onto a junction of streets, the man was able to convince Owen to eddy back toward “his mother” and the quieter street away from city traffic.

What did Owen think of this poor man and woman, whose Saturday morning lives he had invaded?  Owen’s mom wishes she knew.

A few doors down that Boulder street, Owen’s mom had all hands on deck chopping fruit and vegetables and making iced tea for a wedding brunch.  Owen’s dad was out buying a few groceries.  Owen’s sitter, his cousin Rachel, had been given a much-deserved sleep-in that morning, after her long day of Owee maintenance at the wedding and reception.  Owen’s mom was just asking who had seen Owen last–?  Her internal Owen-o-meter was sounding.  This rental house was big, with a generous yard to explore, and was fenced wonderfully with a series of latched gates.  Plenty to keep Owen busy.  But why did she feel uneasy?

Her unease changed to irritation as she learned that no one could find Owen, upstairs or down, nor did he seem to be anywhere in that wonderful fenced yard.  Why today? How can he always tell the worst possible moment?  She thought, expressing her worry and uncertainty as anger, in her usual manner.  You just never knew when he would be calm or not – but guaranteed at the most unexpected moment —!  Indecision made her crosser.  She knew from long experience that these rare and sporadic wanderings could either result in a quick catch, or a protracted search – but either way you never knew which direction to head out of 360 possible degrees.  Owen was never far off…so far… always turned up right nearby…but never came when called, even if he was right there behind a tree the whole time.

Arriving downstairs to find chaos in their midst, cousin Rachel sprang breakfast-less into action.  Luckily for her aunt, she had an existing interest in and experience with caring for special needs people.  And maybe hours spent with Owen in days before had developed her Owee-senses.  In any case, her Owee-senses seemed to be tingling.   She headed out the front door, toward the gate, toward the sidewalk.  She found the gate latched, but stepped through and as she wondered what to do next, caught a snatch of conversation between two passersby, “I don’t know who he is!…”   That clue was enough to send her off to the right—

And there down the sidewalk came Owen!  A gentleman followed him, and explained that his wife had called the police.  Two police men were on the doorsteps moments later, and Rachel called Owen’s very relieved and irritated mother out to the porch to receive a routine lecture from the officers reminding her how important it was to “be careful.”

Was it worth it to Owen? All that effort – so little plastic discovered.  Really, his mother wanted to point out, there was much more opportunity for dumpster diving back at the house, with all the trash they were making.

But how can home stand up to the joy of the open road?

Later on Owen’s mother went to offer thanks and apologies to the kind neighbor man and for want of anything better, offer him the groceries her family would not be able to eat before departure.  It wasn’t hard to guess the house – the one without the fence of course.  She sighed and turned into the side yard to find the neighbor at work watering his trees and lawn. She thanked him.

The man responded as if he had been waiting for the opportunity to speak , at pains to impress upon this boy’s mom the danger of the situation – did she understand? The busy road beyond the school yard! the police! Owen’s nonverbal state!… He had thought of an idea for future however – a hospital bracelet!  In such a situation a hospital bracelet could provide the needed information and save a lot of trouble.  What would the police have done with the boy if they had taken charge of him?

She thanked the man, and left, groceries rejected.

He seemed like a kindly man, she thought , lowering her shoulders, taking deep breaths as she walked back.  A hospital bracelet.  Could it be that simple?  It would all depend…How to explain to someone like this kind gentleman that Owen loves scissors?  Also that Owen is a free spirit, one who takes pleasure in defeating efforts to be contained?  That his cognitive abilities, scattered most of the time, can come into focus when being (A.) denied access to or (B.) denied egress from?  Suddenly and unexpectedly, he can be very creative, and very quick.

There really is no way to explain Owen, she thought.

At home again, Owen’s mom and dad returned to their research on location devices.  What looked like the best choice said its wristband could not be cut with scissors.  It said it was completely waterproof.  It had GPS tracking and a radio signal.  The customer comments were mixed – some people said it was too big to even use.

Weeks later, a location device arrived by mail.  Owen’s parents opened the device package with excitement only to be disappointed.  It was HUGE – absurdly big for Owen’s thin wrist.  Owen would never wear that, his mother thought, and feeling defeated already, she left it in the packaging on the counter.  The whole thing felt too heavy to think about.  She only hoped she would have the intelligence to return the stupid gadget before they couldn’t get their money back.  It seemed demeaning to her.  In truth, she hated the giant black thing, and all that it symbolized in hers and Owen’s lives.  Her hopes had been raised and dashed.

But Owen’s dad although mellow, is made of tough stuff.  With determined bulldog-ish optimism, he put that location device on Owen’s arm.  Owen seemed ok with it.  Owen’s dad began the process of registering the device online, testing it out.  It did not work.  Still, he figured, Owen may as well wear it and get used to it. He contacted the company for help.  Finally, he practiced “locating” Owen on the GPS map on his computer.  He showed Owen’s mom.  She began to feel to feel tentatively hopeful.

She showed Owen her watch, and then put his massive watch on him.  Owen seemed ok with it.  He kept it on.

After some false starts, Owen’s dad was able to locate Owen regularly, and know where he was went with his adult day care program.  Owen’s mom texted one afternoon, “Where are we? Can you find us?”  Owen’s dad could find them.

Owen’s dad is a pretty great guy, in his wonderful bulldoggish way.  Owen’s mom’s hero.   And the next time Owen meets the police, he can show them his really cool new watch.

5 thoughts on “Owen Meets the Police”